All Collections
Forms
Transferring Your Form To Another User

Transferring Your Form To Another User

Learn how to transfer a draft form to another user in your account, or to a predefined group of users.

Oftentimes, multiple people must touch a form before it is completed. For instance, a technician may fill out the bulk of a work order, and then pass it off to their supervisor to sign off and complete the form. GoFormz supports this kind of workflow by allowing you to transfer a draft form to another user in your account, or to a predefined group of users. To learn more about user groups and permissions, see the Managing User Permissions tutorial.

You can transfer your form to another user in your account using either the mobile app, or the form editor in the web interface.

You will see a list of all active users and groups in your organization. Here is what it looks like in the web interface and in iOS: 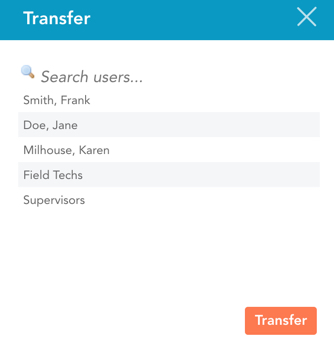 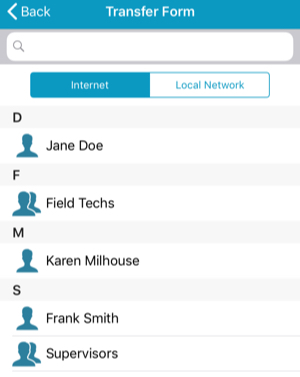 From here, simply select the user or group that should receive the form to complete the transfer. For details and screenshots of how to transfer a form on your specific mobile platform, refer to our Mobile App User Guide.

In the mobile app, your transfer window has two tabs, as shown above:

When you transfer a form to another user, the form will immediately disappear from your Drafts and appear in the other user’s Drafts, allowing them to edit it as needed.

Use case: In the screenshot above, suppose Jane Doe is your supervisor, and needs to sign off on your form. You can transfer the form directly to Jane for her approval.

When you transfer a form to a group of users, the form will disappear from your Drafts and appear as a Shared form for all users in the group that you selected.

Once a user takes ownership of the form, other users in the group will no longer be able to take ownership — unless the new owner chooses to transfer the form back to the group. This ensures that two people can never edit the same form at the same time, creating a conflict.

Use case: Suppose your company policy is that a supervisor needs to sign off on your form, but it doesn’t matter which supervisor. In this case, you can simply assign your form to the Supervisors group, and the first one to see it can claim ownership and sign off on it.