This article is an introduction to Custom Workflows.

Note: We recommend you have some familiarity with GoFormz Workflow Automation and recipe workflow variables before digging into custom workflows.

A workflow is a repeatable automated process. GoFormz Workflow lets you set up form actions that happen automatically based on certain triggers. For example, you may want to send an email to your customer whenever a form is completed. In this case, form completion is the trigger, and emailing the customer is the action.

Custom workflows inject some additional flexibility into what you can do with workflows. Custom workflows are an extension of the Recipe Workflow Model, in the sense that a workflow is modeled as a series of steps, starting with a trigger and followed by one or more actions. However, instead of using a pre-defined sequence of steps, you can choose your own steps from a wide selection of triggers and actions. In effect, you create your own recipe.

Here is one example of a custom workflow:

It would be difficult to accomplish this with a simple recipe-driven workflow because there are so many possible choices — each form has different fields, and you may want different fields pre-filled depending on your needs. Custom workflows make this possible. Custom workflows also allow you to extend the example above in countless ways — what if instead of creating a form based on the Salesforce trigger, you want to do one of the following:

With custom workflows, all of these possibilities are on the table.

A custom workflow consists of a trigger and one or more actions.

Each trigger and action has inputs and outputs:

Inputs and outputs have two other properties that are important to understand:

Here is an example of a simple custom workflow that shows the interplay of triggers and actions, as well as their inputs and outputs. In this example, the custom workflow sends a form PDF and some form data to a Salesforce object whenever a form is completed. 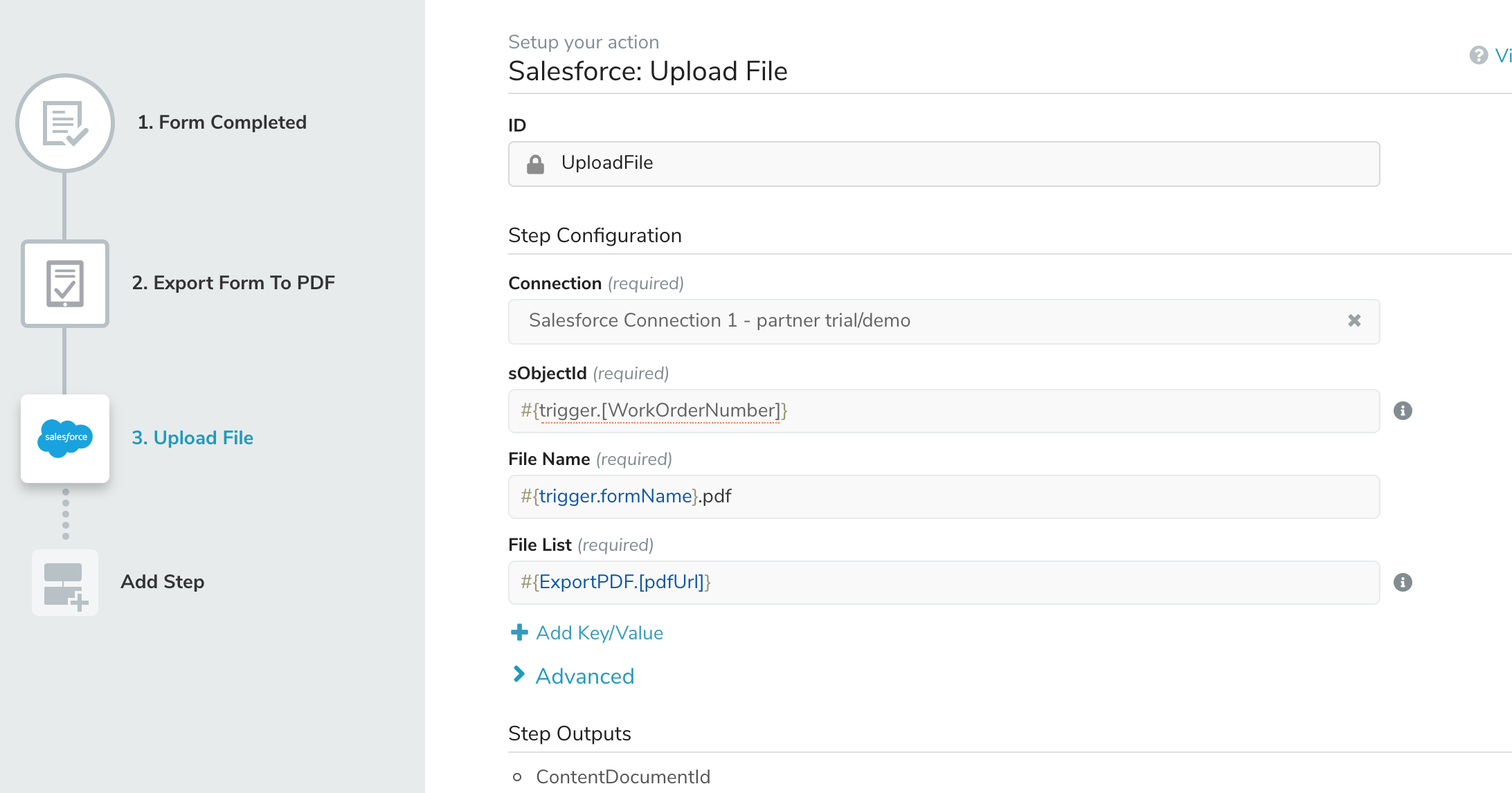 Note that this description applies to GoFormz form fields only! Field inputs/outputs for third-party apps may behave differently.

Every object (e.g. form, template, data source, etc.) in GoFormz has a unique 32-digit hexadecimal identifier or ID. These IDs are used as inputs in many different actions, to identify the object that the action should target. There are also a handful of actions and triggers that return an ID as their output.

In this section, we go over some commonly used object IDs and where to obtain them.

A common workflow practice is storing important IDs somewhere as a reference for future use:

Form metadata variables provide information about the form itself, rather than the values of any specific fields within the form. Note that while formId is technically a metadata variable, we treat it separately in the previous section, because it comes up so frequently.