The GoFormz user, group, and permission infrastructure works as follows:

Groups can be nested. For instance, you can have:

This creates a group hierarchy that is three levels deep, but it can go still deeper if that makes sense for your organization.

User permissions are determined by the group or groups in which the user has membership. There are three simple rules that govern user grouping and permissioning:

There is a special group called “Administrators” that is part of every GoFormz account. This group cannot be deleted or edited, and you cannot add any subgroups to it. The only thing you can do with this group is add members to it or remove members from it.

Users with membership in the “Administrators” group will have full administrative privileges to your GoFormz account. See here for a description of admin privileges.

1. Access control: Since permissions are set at the group level, groups are necessary for controlling user access to various segments of GoFormz functionality. There are three main areas that you can control with group-level permissions:

2. Ease of management & organization: You can set up your GoFormz group hierarchy to mirror your organizational hierarchy. As an administrator, this makes it much easier for you to manage your users and to make necessary changes.

3. Collaboration: During the form transfer workflow, you can assign a form to a group, rather than an individual user. Then any user within that group can claim the form. This is very useful when someone in a particular role needs to fill out a form, but it doesn’t matter who specifically. For instance, in your organization a supervisor may need to review and sign off on all work orders — but it doesn’t matter which supervisor. In this situation, you can assign work orders to the Supervisors group, and then whichever supervisor has the bandwidth to review it can claim it.

Let’s go through a simple example of the user/group/permission infrastructure. Suppose your organization has 3 form templates — Field Work Order, Job Safety Checklist, and HR Hiring Form. And you have 8 people who need to use GoFormz:

You want the user permissions to work as follows:

This might sound complicated, but it’s actually very easy to set up in GoFormz! If you are John Q Manager — the administrator — here is one way you might set this up. Click on the links to learn more about each step.

Here is a summary of what your group hierarchy will look like at the end of this: 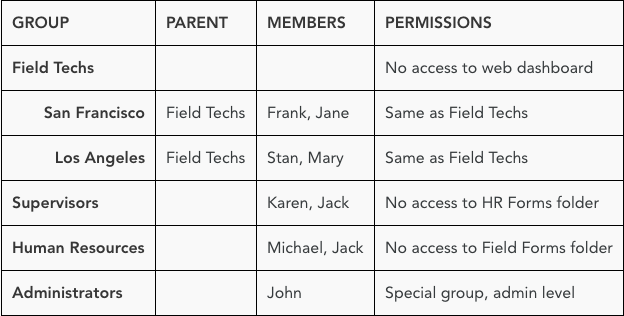 Notice that every user is a member of at least one group, and that Jack is in two groups — Supervisors and Human Resources.

Use the links below for more information on: